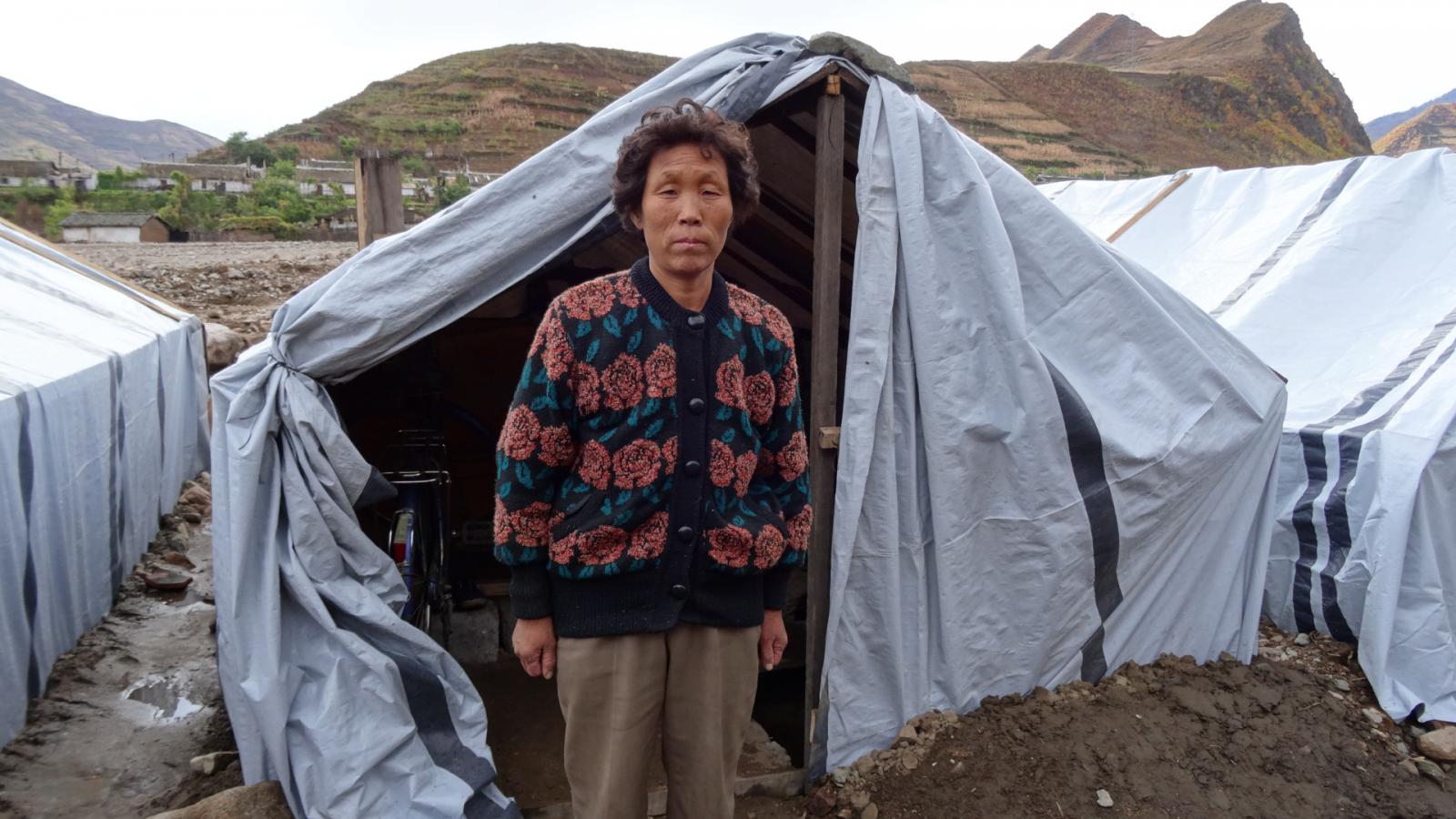 Heavy floods in North Hamyong province have made thousands of people homeless. Mission East is one of the few international aid organisations in the area and provides clean drinking water and hygiene training so that the local population is not infected by dirty river water.

Kim Kyong Ok is sitting at the entrance to the tent that she inhabits together with her daughter and son-in-law. She is surrounded by a few modest objects – some cooking gear, a bicycle and a pair of shoes.

The middle-aged North Korean woman and her family did not manage to take all their possessions with them when floods destroyed their house in late August 2016, and they had to flee in a hurry. This happened to thousands of their countrymen who lost their homes when a hurricane hit North Hamyong province and caused heavy floods. The flood waters cost 138 human lives, and 400 were reported missing – many of them are presumed dead. About 120,000 people became homeless.

In Kim Kyong Ok’s home village in Musan County 14 died, more are missing, and 200 families lost their homes. Many affected families still live in tents, public buildings or houses that have been partially destroyed in the disaster. Efforts to assist them are made more difficult by the freezing winter temperatures.

Mission East is one of the few international aid organisations in the area and is helping affected families in the badly hit counties of Musan and Yonsa. While the North Korean authorities are repairing and building houses for the affected population, Mission East is reestablishing the supply of clean drinking water. The organisation is also educating the population about good hygiene so that people are not infected by polluted river water.

In Musan, Mission East will repair existing, but partially destroyed water systems, and this work will benefit Kim Kyong Ok and her family. The plan is to change old distribution pipes in her village for the benefit of 400 families, the village kindergarten and two schools with 480 pupils.

In Yonsa, Mission East is constructing water systems for 120 families whose houses have been completely destroyed. One of the affected families in this county is Mrs Ri Yon Ok, her husband and their four children aged 12, 8 and 4 years as well as a few months old baby. The 75-year old grandmother also stays with the family whose destroyed house in Yonsuri village must serve as a temporary shelter until the authorities manage to build new houses on higher ground.

The area’s needs are enormous. Apart from the many destroyed homes, 16,400 buildings, including schools, kindergartens and health clinics, have suffered damage, and more than 27,000 hectares of agricultural land have been flooded.

It has been agreed with the UN and the local authorities that the project will start this spring when the ground is not frozen anymore and it becomes possible to work on infrastructure projects. In winter, it can freeze up to 20 degrees, and the frost can be as much as two metres deep.

Until then, Mission East will distribute water purifying tablets enabling the population to get through the winter. They use groundwater for drinking and dig through the river banks to reach it. As this groundwater may also be polluted by mountain water, such tablets are of great use until permanent water systems can be established. With more funds, Mission East can assist even more of the many thousand North Koreans that have been forced to abandon their homes due to the heavy floods.

North Hamyong is the northernmost province in North Korea. The area is mountainous with narrow gorges leading down to the valleys. This probably explains why the Tumen River could rise so severely and quickly reach levels of between six and 12 metres above the average water levels. Landslides also occurred when the river flooded, and the water flowed down the mountain slopes where the population has cut down many trees to grow their crops.