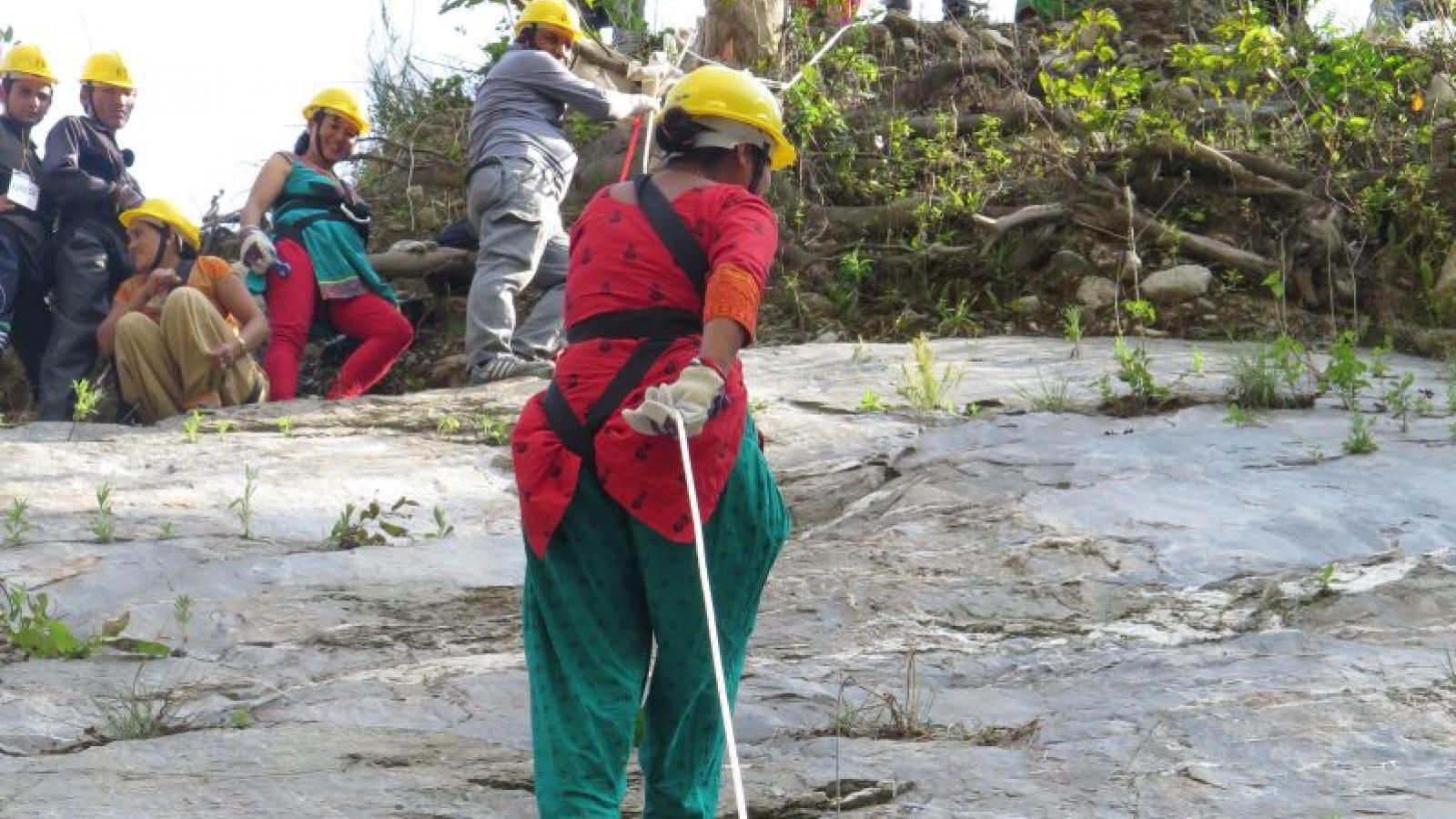 How do you avoid disasters?

Mission East saves lives in Nepal – now and many years ahead – by training the population to reduce the risk of disasters. Lizz Harrison, an expert in disaster risk reduction, and explains how.

When a disaster strikes, it may destroy people’s lives, homes and livelihood. It may also cause a lot of damage to a country’s economy. If the country is poor, it is much more difficult to respond to the disaster, and its development may come to a standstill.

That is why it is important to help developing countries prepare for natural hazards like earthquakes, floods and landslides, says Lizz Harrison, Disaster Risk Reduction (DRR) Programme Manager for Mission East Nepal.

According to Lizz Harrison, it is actually possible to prevent disasters from happening:

“A disaster is a hazardous event that has a significant negative impact on a community or a country, and which may lead to deaths, injuries and destruction of property, livestock and agriculture. If you avoid that, it is no longer a disaster.

Disaster Risk Reduction is a way to support people, so they can prepare for, respond to, and ultimately reduce the risks of natural hazards,” Lizz Harrison says in a telephone interview from her office in the Nepalese capital, Kathmandu.

Nepal is naturally vulnerable to disasters. There is a high risk of floods and landslides, not least because of climate change, and the country is located in an earthquake zone. Nevertheless, local communities were ill prepared for the two major earthquakes that struck the country in 2015.

”People knew that there was a risk, but the last major earthquake was so long ago that it was not a high priority to protect yourself against it. People considered it more important to feed their families. As a result, buildings were not built safely, and people were not prepared to respond to disasters. There was a real lack of understanding of what to do in case of disaster.” Lizz Harrison adds that it is important to support local communities to prepare them better for the next disaster.

Lizz and her Mission East colleagues in Nepal are now working to make the country more resilient to disasters – at local, district and national level. They provide people in local communities with knowledge so they can build resilient buildings and be more aware of their surroundings. Perhaps they will able to detect the warning signs of a landslide, or they will know what to do when one occurs.

They are also trained in first aid and search and rescue work so that they can pull people out of ruined buildings if disaster strikes.

“When they know what to do, they will also reduce the impact that a disaster is likely to have. If more houses are built to withstand earthquakes of a certain category then there will be far fewer deaths, far fewer injuries, and hopefully less people with longer term disabilities,” Lizz Harrison says.

Inclusion is an important part of the work – which means that the most vulnerable groups that are often excluded from their local community, also take part in the project. These people may have severe physical disabilities. If they cannot join a meeting, because it takes three hours to get there on foot, Mission East tries to get transport for them – or come to their homes.

Field staff will go door-to-door to find vulnerable families and hear their views or recommend that they join a community meeting even though they may be shy or concerned about the reaction from the rest of the community. Staff members also ensure that information material is accessible to those who cannot read or are visually impaired.

The poorest are hit hardest

A conscious effort to reduce the risk of disasters not only saves human lives, it also benefits a country’s economy. Every dollar spent on prevention saves five or ten dollars, because economic losses after a disaster are correspondingly smaller. This is particularly important in a country like Nepal, because disasters hit a lot harder, when a country or community is living in poverty.

“It is much harder for them to recover from and respond to the impact of disasters. A developed country like Japan can manage earthquake risks quite well. This is not so in Nepal. When disasters do happen, they set back development much more than in developed countries. Poor countries don’t have emergency services to respond, or a strong economy that can bounce back.”

Small-scale disasters chip away at communities

The two earthquakes in Nepal in 2015 gained a lot of attention from the international community, and in Nepal they contributed to an increased consciousness about natural disasters. But Lizz Harrison stresses that recurring, but less spectacular, disasters can play as big a role as the major ones. Fewer people die in small-scale disasters, but they are responsible for 42 per cent of total disaster-related economic losses in low and middle-income countries. And they chip away at local communities.

”Because they happen far more frequently, they are often the ones that keep people living in poverty for much longer than mega-disasters which affect up to hundreds of thousands of people, but often get much more international response and support.”

Whether they are affected by a small-scale or major natural phenomenon, many Nepalese are now -  thanks also to the work of Mission East – better prepared to respond to floods, landslides or earthquakes than prior to 2015. In some cases, they may even be able to prevent what could have turned into a disaster.