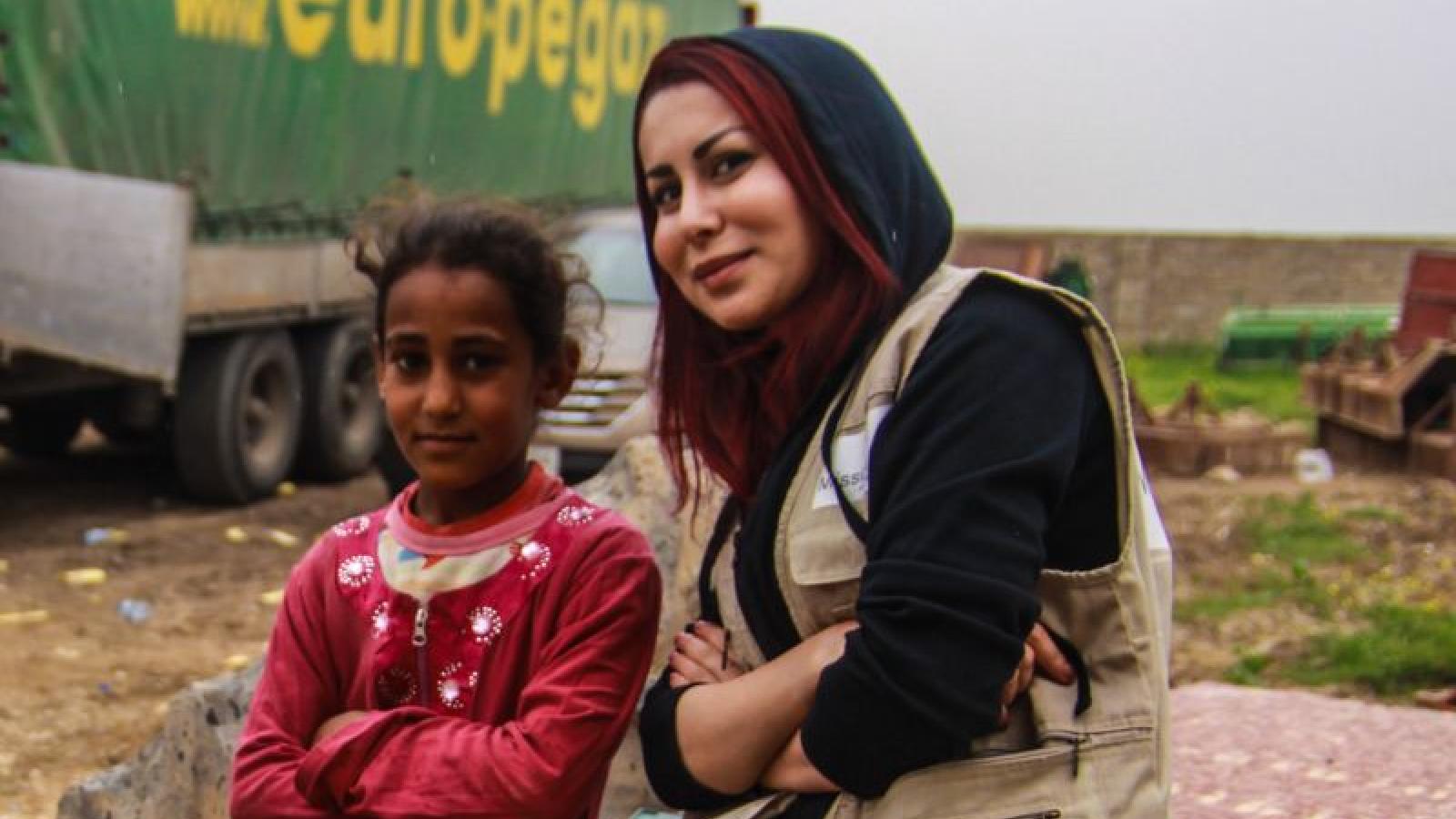 A young woman in the emergency frontline

Rozh Ahmed, 25, was the only female member of Mission East’s emergency response team as it started relief distributions in Mosul in late 2016. The experience has been tough and educational for her.

If Rozh Ahmed had decided on a secure and predictable course in life, she might have become a university lecturer in her home city of Dohuk in Iraqi Kurdistan. Instead, the bright and well-educated woman has chosen to be in the frontline of Mission East’s relief effort in war-torn Mosul.

In late 2016, Rozh entered the eastern part of the Iraqi city for the first time as a member of the Mission East emergency response team. Mission East was the first international organisation to distribute emergency relief in Mosul, and at that time there was heavy fighting going on between Iraqi security forces and Islamic State. Mosul was by no means a safe place to be, and Rozh was one of the first women to go into the field. The encounter with the city and its population made a big impression on her.

“People were suffering. It was heart-breaking, they were starving, you could see it in their faces, women and children were not normal anymore. A woman who was my other’s age came to me and asked for food, she would take anything,” she says.

For Rozh, being in a war zone was a dramatic experience: “I saw many weapons, there were bombs, there was a smell of dead bodies. It was hard to see all the destroyed houses.”

At times, the conflict came too close for comfort. One day, as Rozh who was responsible for financial matters had hired some local labourers to load the emergency relief on to small trucks, local government representatives came to her and asked about them. It turned out that one of the labourers was from IS, and he was taken away by the police.

“All this happened right in front of me, and I was stunned, shocked and afraid. I had just talked to the man,” she recalls.

The early days in Mosul affected Rozh a lot: “In the beginning, I was very emotional, I cried a lot, and when I came home from work, I did not want to see my friends. You have days when your heart is aching, and you can’t take it anymore. But it is okay to be emotional, you just shouldn’t let your emotions affect your work.”

Rozh has not let this happen. On the contrary, she feels that she has grown and become stronger. She is a valued and respected team member, and being able to make a difference means a lot to her.

“When you see people in need, you understand how important our work is. Mission East has made a big difference in Mosul. No one else dared go there in the beginning.”

Islamic State lost the battle for East Mosul in January, and a few weeks later an even heavier offensive started against West Mosul. In this part of the city, Mission East was also at the forefront of emergency distributions, and as an eyewitness, Rozh Ahmed can compare the situation in the two areas. “It is safer in the east. In West Mosul there is a lot of destruction, it was dangerous, we were closer to the frontline, and we had to stay in the cars. There are also many kidnappings.”

For security reasons, Rozh has been pulled out of the field recently. She does not hide that she would like to return, as she prefers field work to office work. She also feels that she – as one of the few women in the field – can pave the way for others.

“When we entered West Mosul, I did not wear a hijab. People were staring at me, because their girls are not allowed to do much. But they need to see that life is not about a hijab. I noticed that young women my own age were watching me. It was strange for them, but I could see in their eyes that they wanted to be like me.”

Rozh Ahmed hopes that she can influence others, but she herself has also been affected by working for Mission East under sometimes extreme circumstances: ”I have changed a lot. I have learned to be grateful for what I have, grateful for my family.”

She has also – despite a demanding job – found the time to complete an EMBA degree, and she spends some of her spare time helping people with a less privileged background than her own.

“I am collecting money for orphans, and I have distributed food to 200 families. I also collect clothes. I use some of my experience from Mission East, and I also try to involve my younger sisters in charity work,” Rozh says. She does not rule out founding her own organisation when she has more experience.

But at present, Rozh Ahmed remains a great asset for Mission East. And while she – for the time being - stays away from Mosul, the city will always be with her: “Distributing emergency relief in Mosul is an experience that I will never let go. When I have children, I will tell them that I was helping people in Mosul.”