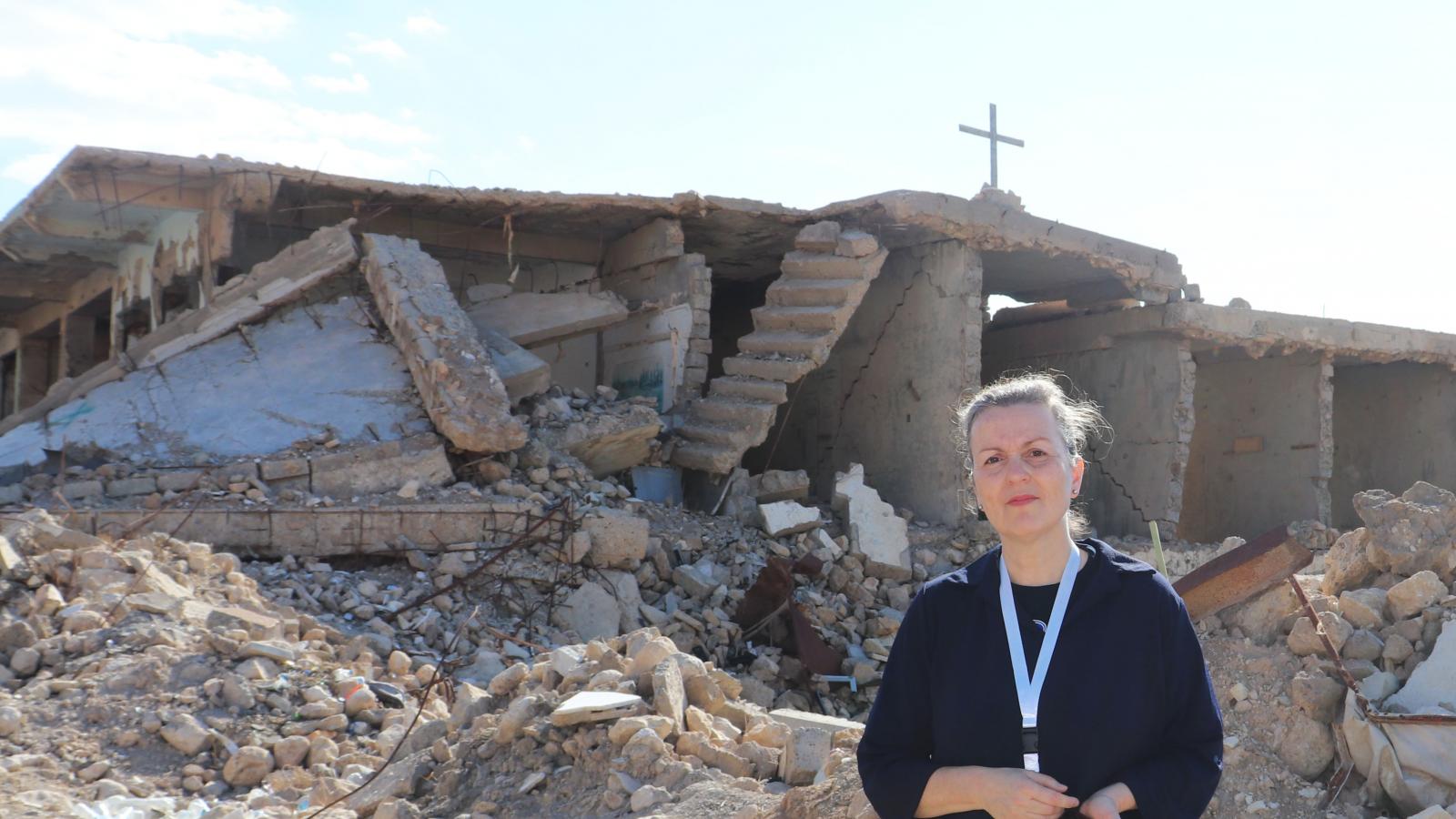 Managing Director Betina Gollander-Jensen has just returned from a trip to Iraq, where a visit to the Yazidi city Sinjar in particular made a big impression. The old town area is still in ruins. The people feel let down by the international community. Yazidi women are deeply traumatized after being captured by Islamic State. And community leaders are seeing signs that another genocide is on the way.

We ask what has made the biggest impression on the Managing Director after her week-long trip to Iraq, where Mission East provides food, water, shelter, sanitation and psychosocial support to children, young people and women who are victims of abuse from The Islamic State.

- I had not in my wildest imagination foreseen a country in such great uncertainty. I had expected that we could go from humanitarian aid to development aid. We're doing that too, but I had not imagined that degree of uncertainty. I thought there was peace in Iraq. It is not, and it shook me, says Betina Gollander-Jensen.

It was especially the encounter with the persecuted minority, the Yazidis, that gripped her heart:

- Some of the people I met - including senior Yazidis - sat and cried in fear as they recounted the genocide they had been through and that they now expected the 74th genocide of the Yazidis. Throughout the millennial history of the minority, they have experienced genocide upon genocide. And they fear and feel that a new genocide is on the way. Islamic State has not disappeared, even though they were defeated in 2017.

The Yazidis are happy that Mission East is helping them rebuild their houses, but they do not know whether something bad will happen again.

- They live in constant and nagging fear, and leading Yazidis say outright that there are signs that a new genocide is brewing.

It is important that we tell the outside world about it, Betina Gollander-Jensen points out. So we do not arrive too late and suddenly discover that, for example, Islamic State is on the move again.

Women only dream of seeing their fellow prisoners again

It also dawned on Betina Gollander-Jensen how deeply traumatized the women are who have been captured and abused and sold as sex slaves by Islamic State (IS).

- I asked the IS-surviving Yazidi women what they dream of in the future. When I ask that kind of question to the poor, they usually answer that they dream of having a house to live in and that their children can go to school. But that was not at all what the women were pre-occupied with. They said they dream of security in the country. They have nightmares about those they left in dungeons and who were executed and laid in mass graves. The women dream that those people can be dug up and identified.

This shows something about the fact that the wound after the attack from IS in 2014 is still raw and wide-open, says Betina Gollander-Jensen.

- They do not even dream of anything for themselves. They have not reached the stage where they begin to dream of their own existence, their own future. They are still connected to their fellow prisoners and fellow sufferers who are still trapped in dungeons or lying in a mass grave. Although they were liberated from IS in 2017, they are still in shock as if it were yesterday.

Physically, the ancient city of Sinjar is still in ruins.

- The area where the Yazidis had bazaars and shopping streets is completely bombed. The church is bombed. There is no reconstruction beyond a few houses here and there. The district is only in ruins.

- It is as if the Yazidis have just been forgotten. Up on Mount Sinjar, we talked to people who almost aggressively said, “What do you want? We have met so many people. They come here, but none of them help us!” We only saw about 10 houses on the mountain that were being built. The rest of the population lives in tents.

What do you think about what we do in Mission East? Is it just a drop in the ocean?

- What we do is incredibly valuable. Yes, it's a drop in the ocean, but it's a hope after all. And that's what the Yazidis need. And then we help the women at our two civic centers to talk their cases through so that they can get an ID card and thus the right to health care. We help them form groups where they paint and bake together.

- Just meeting others and being together to talk about something other than feeling bad means a lot. Many of the women are lonely.

- One thing is that they have experienced all the trauma as prisoners of IS. But when a woman returns as a widow after her husband, who was killed during the genocide in 2014, she is often ostracized by the man's family because she has been a prisoner of IS. In this way, the women are doubly affected. They cannot just draw a line in the sand before and after IS, but the captivity is going to define them for the rest of their lives. It marks them and their children.

- They are also expelled from society. 30-40,000 children are not recognized by the Iraqi state because their mothers have been married to IS-fighters.

There is a need to speak up for the Yazidis so that they are not forgotten, Betina Gollander-Jensen believes.

- The genocide in 2014 must be recognized. And politicians must be made aware so that they - in the midst of all other political agendas – can intervene before it is too late and IS in the shadow of other crises has begun to persecute the minorities again.