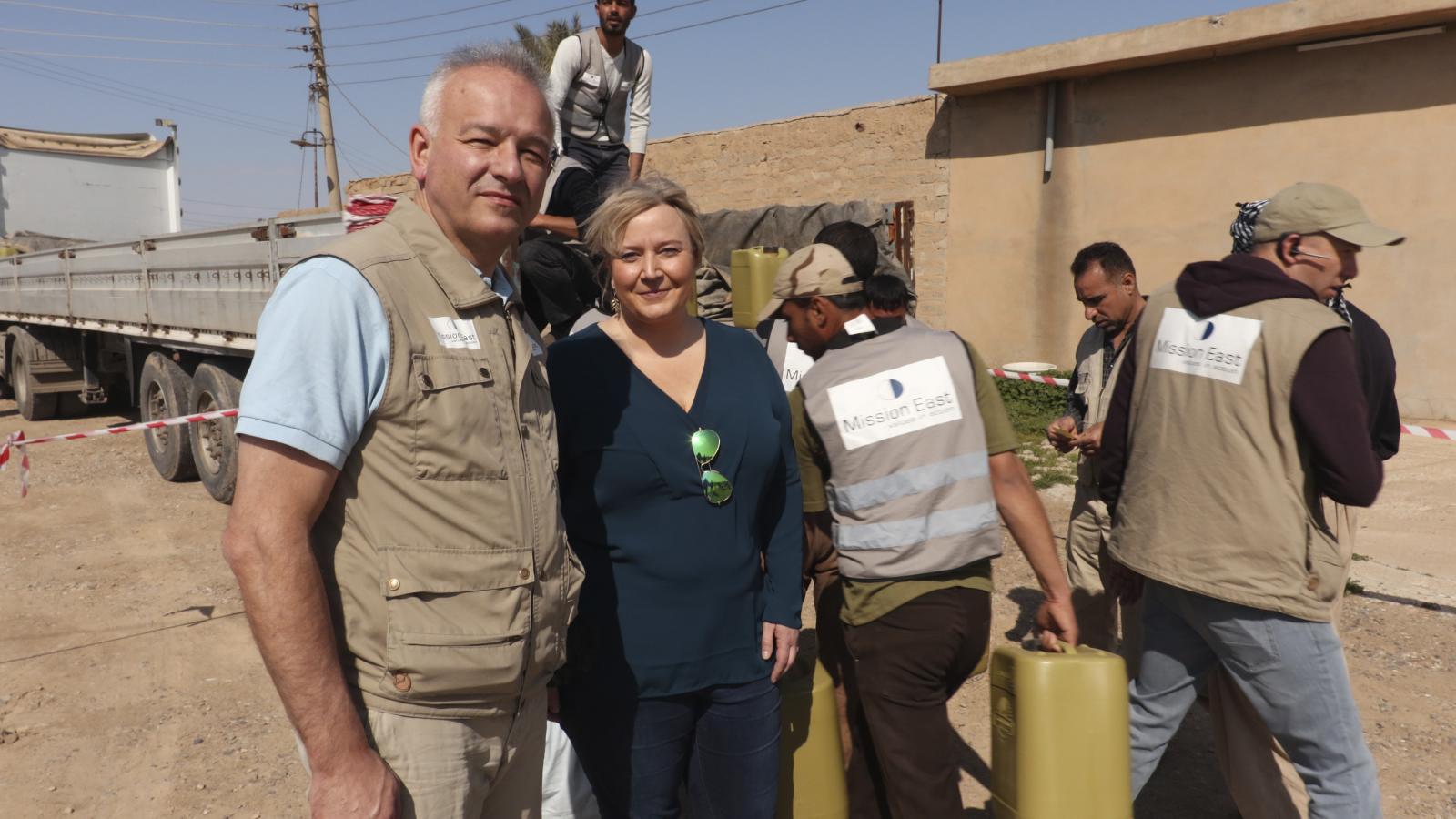 Managing Director Kim Hartzner visited Iraq in March together with Christina Egelund, spokesperson on political affairs for one of the governing parties in Denmark, Liberal Alliance. Meeting Mission East beneficiaries made a strong impression on both of them.

The villages surrounding the major Iraqi city of Mosul lie in ruins. The devastation caused by the fighting between Iraqi forces and fighters from the terrorist movement Islamic State is so severe that it reminds you of images of the aftermath of World War II.

“It makes a huge impression to see entire families carrying everything they own. A man on crutches is walking on the highway with his wife, three children and their few possessions. It is a completely indescribable human tragedy,” the Mission East managing director said.

Together with MP Christina Egelund he visited a number of liberated villages in the area around Mosul. They took part in distributions of emergency aid and were also able to ascertain that previously distributed aid makes a big difference to the local population.

The inhabitants of the Christian village of Telasquf recently returned to their looted, devastated houses after two years of displacement. Mission East has distributed blankets, mattresses, hygiene kits, kitchen utensils and fuel to help the 1.800 returnees get through the winter.

”They are very grateful, as they have returned to nothing. Islamic State has destroyed everything. They were particularly grateful for the kerosene heaters and fuel which enable them to heat their houses. They had been empty for two years, they have been looted, and there is widespread destruction. The houses of the nuns are looted and completely destroyed, and at the cemetery all tombstones with crosses have been overturned,” Kim Hartzner said.

The day before, he and Christina Egelund joined a distribution in another village, Quri Khariban, about five kilometres from Mosul. In this village, 144 families (more than 850 people) got 80 litres of kerosene each for the ovens that they use for heating their homes as well as cooking.

Many inhabitants first had to live through the occupation by Islamic State, then were forced to flee during heavy fighting between the terrorist movement and Iraqi forces. When they returned to their homes, the village was plundered, and now people need food, clean water and electricity.

”It is quite obvious that there is an immense sense of desperation among civilians and victims of the conflict,” Christina Egelund said.

This desperation can take on severe forms if some families receive aid and some don’t. Mission East tries to avoid this by cooperating closely with local leaders, ensuring that distributions run smoothly. This successful cooperation is praised by the Danish politician.

“I am very impressed with the work that Mission East and others carry out in the area. There are obviously many latent conflicts. When delivering emergency aid, many precautions are taken to avoid violent incidents,” Christina Egelund noted.

Many of the inhabitants of Quri Khariban belong to the minority Shabak people that have been trapped during the conflict in the area. They are new receiving help from Mission East. The organisation will continue distributing aid to the population in an around Mosul – with an emphasis on particularly vulnerable groups.

Mosul was occupied by Islamic State in August 2014. Two years later, Iraqi and Kurdish forces launched an offensive with international support to retake the city. The liberation of the entire city is getting nearer, but the fighting has cost many human lives and displaced more than 300,000 people. Mission East was the first international NGO to enter the liberated eastern part of Mosul and has distributed emergency aid to 27,000 people in and around the city since then. All in all, Mission East has assisted 129,000 Iraqis since 2014. The organisation runs six community centres and helps Iraqi returnees rebuild their houses and establish water systems.