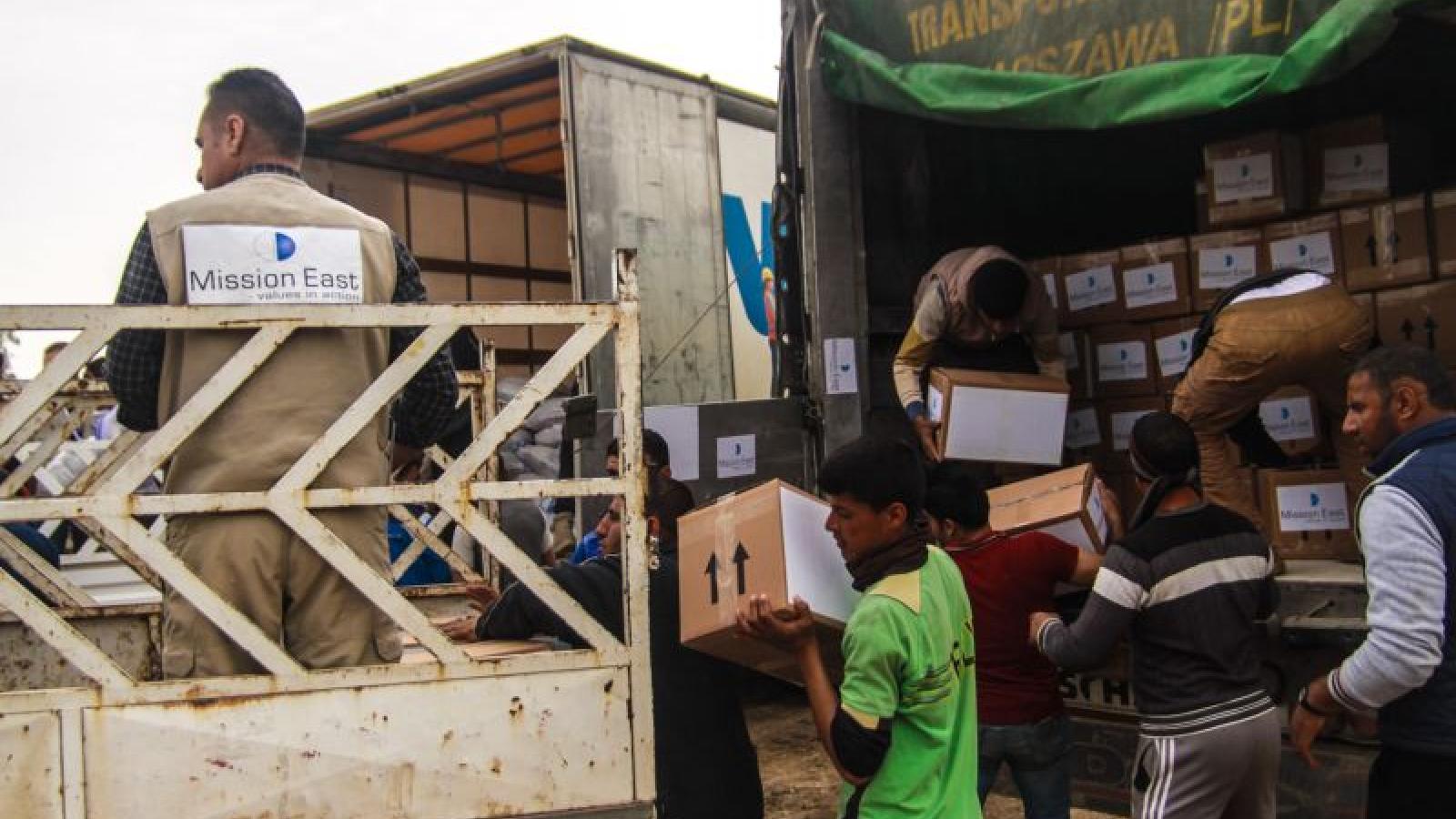 Last year, Mission East was one of the first international organisations to help the population of East Mosul. Since then, the organisation has also been at the forefront of relief efforts for the beleaguered inhabitants in the western part of the city.

As the small truck carrying two tons of food came to a halt, Knud Andersen knew that there was little time to waste. The food convoy had entered West Mosul – a far from safe area – and the truck could not remain in its place for long. Otherwise, it would risk becoming a target for fighters from Islamic State or facing a hungry crowd.

“There were three of us who had to move two tons of food from one truck to another within 15 minutes,” the Mission East emergency relief coordinator for Mosul recalled.

They managed to do so, and after the unscheduled stop, the convoy could continue its journey through West Mosul where more than 6.000 desperate people were expecting to receive 45 tons of food aid from Mission East. The parcels containing rice, beans, cooking oil, salt and other goods will feed a family for a month, and when you have nothing, it can make the difference between life and death.

Aid for a thousand families

The 22 small trucks spread around the area, and within a few hours, the relief packages for a thousand families had been distributed.

The beleaguered population of West Mosul suffered more than two years of occupation by the brutal regime of Islamic State and has since been caught in the crossfire during the fighting between Iraqi government forces and IS fighters. Mission East has now entered this part of the city after a highly praised aid operation in East Mosul.

The incident with the truck shows that it is not without risk to deliver emergency relief in Iraq. However, it also illustrates that careful planning and security precautions can keep aid workers safe and avoid causing unnecessary danger to beneficiaries so that aid can distributed safely and responsibly.

“The key to our strategy is to transport the food on small trucks that can travel far into West Mosul relatively easy and unnoticed. In this way, we avoid chaotic food distributions in big, open squares where might is right, and where civilians are often killed because they are fired at,” Knud Andersen said.

On that April day, Knud Andersen had a couple of spare trucks should any accidents occur. This decision saved the day for almost 300 residents of West Mosul who received food parcels that otherwise would not have reached them.

In the coming weeks, Mission East will make a difference for thousands of more people in Mosul. At the time of writing, fighting is still going on the liberate the city.

If Islamic State is expelled, it does not mean that it will be safe to return for the hundreds of thousands of people who have left the city. The need for aid will not decrease. The destruction is severe, and those who have remained in Mosul have nothing left. The same goes for returnees.

According to Knud Andersen, more than a quarter of a million people in Mosul will face a struggle for food and clean water over the next few months. Therefore, Mission East is ready to assist even more people in the Iraqi city.