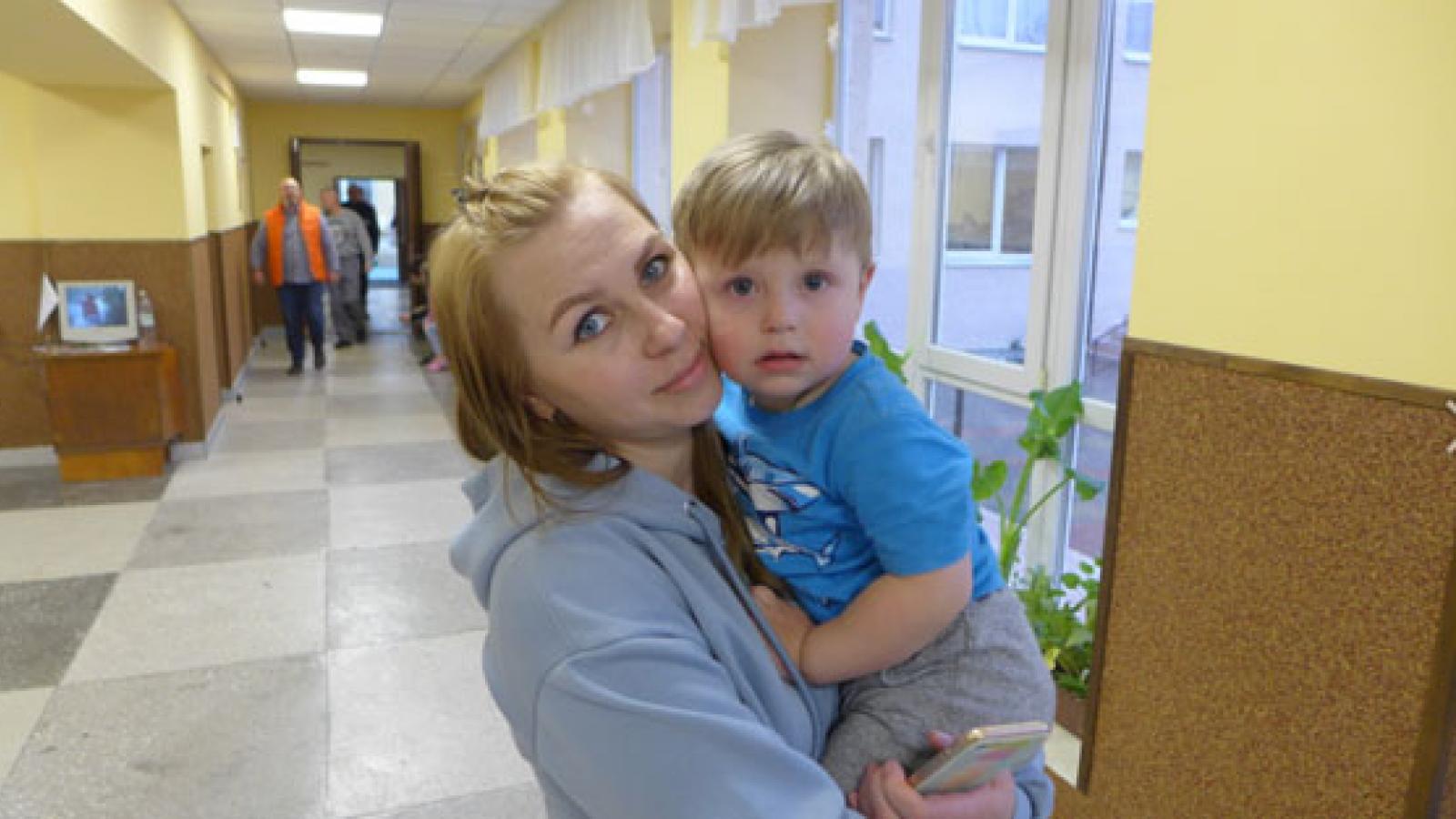 Ukrainian displaced people holding their breath: Should we stay or flee?

Families from Eastern Ukraine are fleeing from bombs that destroy houses and entire neighborhoods. They would rather stay together but do not know how the war will develop, and so they wait in Western Ukraine.

Should Ukrainian women and children flee across the border from war-torn Ukraine to safety in the EU, or should they stay with their husbands? Whatever they choose, they receive food, hygiene items and accommodation from Mission East's partners in Ukraine and on the border with Hungary.

John Karren, who is an experienced consultant for Mission East, has just returned from an emergency aid trip across the border to Ukraine.

Here he met, among others, Lyudmila from the Luhansk Region in Eastern Ukraine, who has fled to the west with her little son Vlado, just 20 months old, and her husband and second son. She says that her town was bombed from the air and that a huge explosion outside the family house blew out all the windows and doors and threw her to the floor. Together with her husband and two children, they sought shelter in the basement of the house.

The next morning they saw that their neighboring houses had been totally destroyed. So they quickly packed their papers and the most necessary things and hurried away in their car. Now they live in a school in the western Ukrainian town of Berehove, where volunteers cook, distribute hygiene items and have improvised sleeping quarters for 60 people with the help of the municipal government. It is the area's Baptist churches that are behind the help with support from HBAid, which Mission East supports.

Families are waiting to see if they can stay together

What is the situation in Ukraine and the border areas right now? we ask John Karren

- When the flow of refugees was at its highest, 2,000 people came across the border into Hungary each day at the border post where HBAid has a reception center.

Right now, very few are coming, he says, but that certainly does not mean that the humanitarian catastrophe is over. It simply means that the first wave of displacement is over:

- “There are hundreds of thousands of displaced people inside the western part of Ukraine who are awaiting the development of the situation. There is a national state of emergency where all men between the ages of 16 and 60 must stay in the country in case they are needed to fight. The families do not want to be separated, so therefore they wait and see what happens with the hope that they can keep their families together,” says John Karren.

So what is needed now?

- There are still many displaced people inside Ukraine who have lost their homes and need basic emergency assistance. The weather has become warmer, so in that area the situation is better. But they still

desperately need food, shelter, hygiene items and sometimes kitchen utensils so they can make ends meet. The displaced are living under great pressure.

John Karren visited HBAid's partners, which is a charitable foundation under the region’s Baptist churches.

- They already take care of 500 displaced people, give them shelter and cook for them three times a day. Families sleep in churches, schools and in hostels and hotels or in private accommodation.

Has sent 20 trucks with emergency assistance

HBAid in Hungary has already sent 20 trucks of donated food and hygiene items.

- They are very dedicated, says John Karren. - They have been working non-stop since the war began.

HBAid is one of two organizations in the EU-Cord network that responded to Mission East's request for cooperation on emergency aid for Ukrainian refugees and displaced persons. The other organization is Medair, with whom Mission East collaborated in 2015, when Nepal was hit by two major earthquakes, and in Syria more recently. Danida made emergency funding available only two days after the war began.

In Nepal, John Karren was also involved as a consultant and made sure that Mission East's office in the capital Kathmandu quickly adapted to the situation and gave emergency relief for earthquake-stricken Nepalese in the countryside.

Has a common history with the eastern countries

Why are you engaging yourself in emergency relief?

- I have always worked closely with relief and development organizations. I have been closely associated with the countries of the former Soviet Union since 1994 and have worked in Central Asia and the Caucasus: for eight years in Georgia and Armenia and for four years in Kazakhstan, Kyrgyzstan, and Tajikistan. In the latter for Mission East. So I have a common history with those countries.

The picture: Lyudmila and son Vlado. Their names have been changed for the sake of their anonymity.